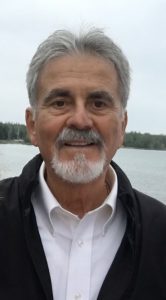 Andre was born and raised in Kopanaki, a small agricultural town in South western Greece. He was always academically driven and dreamed of leaving his small town in order to attend law school in Athens. After years of hard work and dedication, he was accepted. In the meantime his older brother Constantinos had emigrated to Canada and was becoming quite successful in the restaurant business in London Ontario. Constantinos urged his brother to leave economically destitute Greece and join him in Canada where they could work together. Andre arrived in Canada in 1958 with small suitcase filled with big dreams. He began working in the restaurant business with his brother and it was there that he met his future wife Victoria at the soda fountain. They were an instant hit and were married in 1962. Constantinos and  Andrea Would soon after open the Acropol restaurant in. Stratford. His son George was born in Stratford in 1964. While things in the restaurant business were going well for the brothers, Andre’s dreams of attending University continued to call him. Attending law school in Canada was out as he felt he didn’t grasp English well enough to thrive in such a language heavy field. He was however very confident in the universal language of mathematics so he ultimately decided to pursue  engineering. He was the first person of Greek descent to attend the University of Waterloo engineering program. His daughter was born while he was in school in 1968. He graduated in 1971 and started his first job as an engineer with the Heinz corporation in Leamington. In 1973 he started with Ontario Hydro and moved to Port Elgin soon afterwards where he lived for the rest of his life. Together with his wife Victoria they started a number of businesses including The Burger Trail and The Aberdeen restaurants all the while working full time at Bruce Nuclear. He was much loved and respected by his family and  community. He will be missed dearly.

Predeceased by his parents, George and Lemonia Arvanitis, and by his siblings, Maria, Costantinos and Kalliroi.

In keeping with Andre and his family wishes, Funeral Services and Interment will take place in his beloved homeland and birthplace of Kopanaki, Greece. Repatriation Services entrusted to the Eagleson Funeral Home, Southampton.