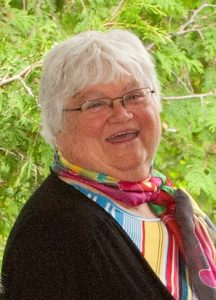 Daughter of Harvey and Dorothy (Eby) Plant of Allenford, ON, both deceased. Survived by her brother George Plant and his wife Margaret of Silver City, NM, USA, her nephew Geoffrey Plant of Taos, NM and Geoffrey’s daughter Reina Hennerty Plant of Albuquerque, NM.

Audrey graduated from Owen Sound West Hill High School and was a Political Science major at the University of Waterloo. She loved to travel and did so extensively world-wide. She trained for and became a Travel Advisor. Audrey worked with several travel agencies in Bruce and Grey Counties during her career, ending at Hampton Travel in Southampton. She also worked part time for many years with her parents at Plant’s General Store in Allenford.

If you care to make a donation in Audrey’s name, please send it to Owen Sound Animal Shelter. Arrangements are in the care of Eagleson Funeral Home, Southampton, ON. Cremation has taken place. There will be no visitation or funeral ceremony. Interment in the Plant family plot in Southampton Cemetery.