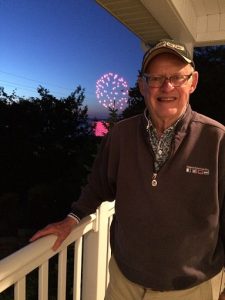 Elbert Earl (Bert) Walker passed away peacefully, at his home in Southampton, Ontario on June 18, 2022.  He is survived by his wife, Eleanor Clara Walker (nee Truax).

Bert was predeceased by his wife Shirley Jane Walker (nee Ashe), and will be missed by their children, Joanne (and Ken Schaeffers), Tom (and Vivian Walker) and Heidi (and Jeff Marnoch). Bert was so very proud of his seven Grandchildren: Adam (and Catherine Schaeffers), Katie (and Jeff Topham), Maggie Schaeffers (and fiancé Pete Baldwin), Luke Walker (and Aylish Cotter), Ben Walker, Cameron (and Rachael Marnoch) and Andrew Marnoch.  He was thrilled to be Great Papa to Emily and Allison Schaeffers, Ace Topham and Richard Walker-Cotter.

His family with Eleanor included Martha (and Rod Taylor), Rob (and Angelica Hobbs) and grandchildren Hayley Taylor and Kalinda Hobbs.

Bert lived a wonderful 92 years.  Born in Ottawa on April 23, 1930 to parents Thomas Earl Walker and Vienna (Patterson), he was predeceased also by his sister Eileen (Walker) Stevenson.

Bert’s career began at British American Oil (BA) in 1953, just 17 days after marrying Shirley. His first job was to remove the cobwebs from the warehouse. Bert was a shining example of a “Company Man.” Through BA’s merger with Gulf Oil and multiple promotions (which included nine moves crisscrossing the country) Bert worked 33 years for the same company, retiring when Gulf Canada was sold in 1986. Over his career, Bert became a singular force in shaping the company. He went from cobwebs to boardrooms and became the best example of what hard work, commitment and dedication can produce.

Southampton Ontario was a constant for Bert and his family in the early years. He built two homes on Knowles Lane. Southampton was at first a place for summer vacations then, after retirement, his full-time home. He was always busy and productive. He shared with his family that the key to being engaged well into his 80s and 90s was to always have a project on the go. When he wasn’t travelling the world, he was an author, a philanthropist, and an historian. He wrote books and updates that connected his family to their roots, wrote a book in honour of his father and loved his roles as father, grandfather, and great-grandfather.

“…the purpose of my life, is to leave life better than I found it. In a special way, Joanne, Tom and Heidi, together with their spouses and children, are already providing fulfilment to this purpose. Through them, I am able to see a continuum of growth in spirit and stature.”

If desired, in lieu of flowers, memorial donations may be made to the Saugeen Memorial Hospital Foundation.

Celebration of Life Service to take place at the Southampton United Church,  Southampton, Ontario on Friday August 12, 2022 at 1p.m.