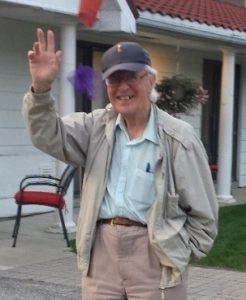 At Earl’s request, there will be no funeral. Cremation has taken place. A family graveside service will be held at the Hillcrest Cemetery, Tara, in the summer.

Morrow, Earl Grange, born Aug 1, 1926 in Chesley, ON, passed away peacefully with family by his side, at Walkerton Hospital on March 7, 2020.  Earl is survived by his wife Faye, whom he married in 1955, children Reg (Bonnie), Gail (Clem), Grange (Linda), Kelly (Rob), grandchildren Krista (Duane), Dawn (Jean), Christopher, Devin (Henry), Sagan (Justin), Jess, Joey (Sara) and great grandchildren Alexis, Tyson, McKinnley, Cole, Dayton and Ariana, sisters Leone Gingrich and Mae Maas, sister-in-law Judy Morrow, and many nieces and nephews in Bruce Co.  Earl was predeceased by his mother Elizabeth (Lizzie) Grange, father, Almer Morrow, step-mother, Winnie Boyce who raised him, brothers Jimmy, Kenny and John, sister-in-law Elsie Morrow, brothers-in-law Jack Gingrich and Ken Maas and in-laws Percy and Marion Ward. Earl’s career began when he enlisted in the army during WW11 and was sent to work as a clerk at Camp Utopia in St. John, NB. where he learned typing and shorthand.  His typing served him well over the years as he typed amazing letters and poems to his family and wrote articles for the local newspaper. After the army, he joined the RCMP and his service took him to Carman, MB., Fort Smith, NWT, Winnipeg, Emerson, Brandon, Deloraine, MB then to Ottawa, ON retiring in Ottawa, in 1975.  He then spent the next 10 years as a security guard with the Bank of Canada where he enjoyed the comradeship of other guards who worked there. Upon retirement, he and Faye moved to Port Elgin where they enjoyed walking on the beach and going for ice cream, and taking day trips to enjoy the countryside.  Wherever he lived, he enjoyed long walks with cane in hand – he could put on many miles in a day!  Adventures took them on a European vacation, a bus trip to the southern USA and trips to visit family across Canada. Earl was a voracious reader of all things philosophical and spent many hours browsing the local library for the treasure that interested him that day.  He had a huge library of his own and was also a great story teller. He loved to work in the backyard at their home in Port Elgin and his advice was often sought on how to properly trim a tree.  Earl thought the world of his neighbours.   Earl did amazing caricatures of his fellow workers at the Bank of Canada, famous philosophers, poets and politicians.  He also researched and recorded a lot of family history and loved to watch old movies. The family is extremely grateful for the compassionate and exceptional care and kindness that was extended to Earl these past months and years. Nurses Nancy, Jessica, Ashley, and so many other staff that are part of Unit 2 at Walkerton Hospital.  Laura Balletta at Owen Sound Hospital, Mary Stokes at Hampton Court in Southampton and her amazing staff in 2016-18, Lucy at Maple Court in Walkerton as well as all the wonderful cafe/hotel staff at the Travelodge in Port Elgin; Salvation Army Port Elgin;  Steve @ Books and Strings in Port Elgin,  Condor Fine books and Bruce County Library in Kincardine.  At Earl’s request, there will be no funeral.  Cremation has taken place.  A family graveside service will be held at the Hillcrest Cemetery, Tara, in the summer.  Arrangements entrusted to Eagleson Funeral Home, Southampton who graciously took Earl for his last tour around the countryside.  In lieu of flowers, donations can be made to the Walkerton and District Hospital Foundation  WDHFoundation@sbghc.on.ca , Salvation Army Owen Sound/Port Elgin Corps, The Bruce County Public Library or simply offer someone a kind word, a gentle smile or thoughtful gesture in Earl’s memory.