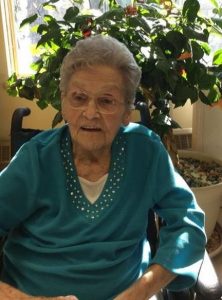 At Faye’s request there will be no funeral. Eagleson Funeral Home, Southampton is in charge of arrangements. Cremation has taken place. Burial will be at Hillcrest Cemetery, Tara, ON at a later date together with Earl.

We are saddened to announce the passing of our mother, Elsie Faye (Ward) Morrow who passed away at The Village in Hanover, ON, November 9, 2020 due to a stroke. Faye was born on April 18, 1929 at Perryvale, AB. Faye is survived by: her children Reg Morrow (Bonnie), Gail McNichol (Clem), Grange Morrow (Linda), and Kelly Cunningham (Rob); her grandchildren Krista (Duane), Dawn (Jean), Christopher, Devin (Henry), Sagan (Justin), Jess, Joey (Sara); great grandchildren: Alexis, Tyson, McKinnley, Cole, Dayton and Ariana; and sisters Phyllis Visitiew, Shirley (Ron) Goeglein, Sylvia Race, and sister-in-law Doreen Ward all of Alberta; as well as many nieces and nephews in Western Canada. Also sisters-in-law Leone Gingrich, Mae Maas and Judy Morrow.

Faye was predeceased by her husband Earl Morrow, parents, Percy & Marion (Lewis) Ward of Perryvale Alberta, as well as siblings: Beatrice, twin sisters Joy and Jean, and brother Glen as well as her in-laws Almer and Winnie Morrow, all of whom she has deeply missed.

Growing up on a farm for Faye, in Perryvale, there was always a lot of chores and everyone had to help, no matter your age. A large garden was planted in the summer and vegetables gathered and cooked for the big family, who would be hungry after a hard day’s work. Faye’s love of cooking, no doubt, was influenced by her mother, who in the early days, ran the Lewis Stopping House, cooking for people who were settling in the west and needed a good meal along their travels. Faye learned through the depression years that it was important to SAVE EVERYTHING. This motto influenced her the most throughout her life.

When Faye was left on her own with two small children to raise, she moved to Fort Smith, NWT and found work cooking. This was where she met a young Constable Earl Morrow, the man who would become her husband of 65 years. Throughout their lives, Earl was stationed in several Manitoba towns namely Winnipeg, Emerson, Brandon and Deloraine (of which they made life-lasting friendships over their years). Faye and Earl expanded their family along the way. Faye could tell many stories of being an RCMP wife in those early days—with postings in one-man rural detachments–not at all desirable, nor an easy life while raising 4 young kids. But she did it!

Faye and Earl’s final RCMP destination was Ottawa, and Faye was employed at Steinberg’s grocery store. Faye had some very dear friends in her Ottawa neighbourhood–The Ritchie’s (best friend Margaret), the Hughes’, as well as

babysitting for neighbourhood families (Baker and Hunter). She dearly missed the city of Ottawa and those relationships.

Over the years, Faye spent many hours reading Gladys Taber books and browsing her cookbook collection with all the yellow sticky notes—trying to decide what she was going to make next! She sent/faxed recipes to family–many of which have become our “go to” recipes! Her Christmas packages would arrive and the grandchildren would delight in the cut-out sugar cookies that were decorated so beautifully. Included in the package would be lots of newspaper clippings. She always thought about family and focussed on each person’s individual interests, whether it be cats, horses, fishing, hunting whatever—she was attuned! She baked for her neighbours regularly and delivered beautiful home-made bread wreath’s on Xmas Eve.

Faye’s other love was her Port Elgin backyard and patio–tending to her flowers and sharing her seed and bulbs (hollyhocks, phlox, lilies, *pig barn* daffodils, and more). Her greatest joy was her home grown Millcreek tomatoes, the fruit trees and her cherished raspberry canes. She made so much jam, and gave tons to family and neighbor’s Chuck and Jennifer especially, and she used it to fill her famous jam-jam cookies, loved by all! Chuck and Jennifer’s great care and concern over the years will never be forgotten. Mom and Dad considered them part of the family as do we!

Touring the countryside with Earl, visiting family (local and distant,) taking in the Port Elgin Pumpkinfest, going for walks uptown and long walks on the beach, browsing through thrift stores to find the perfect muffin tin, going to the local market gardens at Keady for fresh vegetables, were all her favourite pastimes! So often Mom would say “I don’t know where the time goes???” She was never bored!

When Faye could no longer manage living in their home the last couple of years, she was well cared for at the Revera Trillium Court in Kincardine where she lived for several months, and then she moved to Revera The Village Community in Hanover. Faye received such excellent care in both of these homes and the family is extremely grateful for that. Even though our family has been spread apart geographically, we have stayed connected through frequent phone calls and Facetime. Covid-19 has been the enemy for us all.

Very special thanks to Mom’s favourite caregiver, dear Susan who sat with Faye during her last hours in Hanover. Susan said it was her honour.

At Faye’s request there will be no funeral. Eagleson Funeral Home, Southampton is in charge of arrangements. Cremation has taken place. Burial will be at Hillcrest Cemetery, Tara, ON at a later date together with Earl. In lieu of flowers, if you so choose, donations would be so gratefully received by cheque to the

Please take the time to read one of Faye’s favourite poems: Desdirata by Max Ehrmann. Over the years, she would end many handwritten letters with *Remember Desdirata* which is especially poignant in today’s times…. 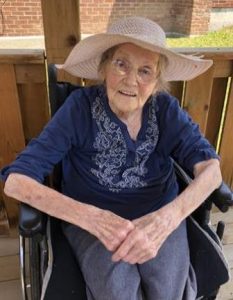 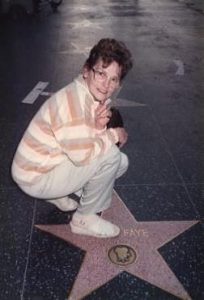 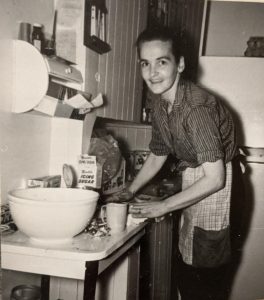