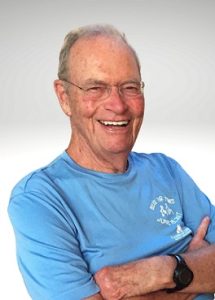 Born in Toronto, Fred lived there until moving to his family cottage in Southampton in 2020. On September 2, with his family by his side, Fred died suddenly due to complications from bacterial pneumonia after a short stay at the Saugeen Memorial Hospital, at the age of 90. Fred was predeceased by his parents Frederick and Ruth Hamilton, his brother Chuck and his sister June Peters.

Fred had a deep, abiding love for his best friend and the love of his life for 66 years, his wife Joan; his children Doug (Lynn), Paula (Bill), Marni and Beth; his grandchildren Freddie, Dougie, Erin, Jill (Anthony), Steph; his great-grandchildren Roan and Sloan; and his black lab Popi, who was never far from his side. His love for them knew no bounds and he was loved the same way in return.

Fred was educated at Upper Canada College. In 1954, he graduated from the University of Toronto with an Honours Engineering Business degree. He was an alumnus of Osgoode Hall Law School and was called to the Bar in 1958. He joined Miller Thompson to work alongside Bob Hicks, where they specialized in labour law. In 1972, Fred, Bob and others established Hicks Morley Hamilton Stewart and Storie–the preeminent boutique labour and employment law firm in Canada. At the time of his passing, Fred held the title of Partner Emeritus and continued to be involved informally in the firm’s activities.

Fred was the Managing Partner at Hicks for many years and during this tenure he instilled in the firm’s lawyers that a client’s interests always come first. Fred was one of the first labour lawyers in Canada and was involved with the drafting of legislation that continues to be relied upon today. His passion for labour law was the foundation for his skilful, deliberate and strategic advice to clients–the more complicated the case, the more he enjoyed crafting the solution. Fred led by example and enjoyed interacting with every member of the firm–staff, students and lawyers alike and always found time to say thank you for the contributions made both within and outside of the firm.

Fred’s standard for himself was excellence in everything he did, and he relished the opportunity to contribute through many community volunteer leaderships roles. He served as the President of the Toronto Board of Trade and President of the York Downs Golf and Country Club. For many years, Fred served on the Molson Indy Festival Foundation and its successor, Grand Prix Charitable Foundation. He was founder and co-chair of the Bike for Tykes Volunteer Committee for 19 years with his daughter, Marni. This event raised over $3.5 million for children’s charities. Fred and Joan also played a key role on the inaugural committee of the Row for Gold fundraiser for the Canadian Olympic Rowing Team.

Raised with a love for sport, Fred excelled at many, including golf, rowing, curling, skiing and playing hockey with his grandsons. Fred shared this passion for sports with his family, who continue to celebrate this tradition. Fred never missed an opportunity to watch his family compete in what they loved, no matter the distance, often travelling the world to do so. What adventures he and all his family have had!

A gracious, classy, and consummate gentleman, Fred was an exemplary role model and mentor to many. He always had time to listen, and offer reassurance in just the right measure. He was unselfish, generous and boundless in his efforts to care for others.

Fred lived by the quote: “I expect to pass through this world but once. Any good therefore that I can do, or any kindness that I can show to my fellow–creature, let me do it now. Let me not defer or neglect it, for I shall not pass this way again.” (Stephen Grellet)

Fred was a fun, caring, nurturing father, grandfather and husband, and the most wonderful friend and second father to so many. He was a constant, positive presence in so many peoples’ lives that will miss him dearly. His sudden passing is heartbreaking, but our many cherished memories will see us through.

A private burial will be held at the family plot in the Mount Pleasant Cemetery. When it is safe to gather, a celebration of life for family, friends and colleagues will be held at the Granite Club, where Fred was a longtime member. Details will follow.

In memory of Fred, please consider donations to Fred Hamilton Park & Playground Revitalization, Saugeen Memorial Hospital Foundation (link below) or a charity of your choice.

Fred Hamilton Park & Playground is named after Fred’s father who was also named Fred Hamilton.  We have listed below a number of links with the following information:

With an extremely generous donation from Fred Hamilton in 2020, the Friends of Roxton Road Committee is also planning to add some beautiful curved benches and plaques about the Park’s history. The new seating is set to overlook the new playground near the public washrooms and community kitchen space, aka “Fred’s Building.” The new benches are planned to go in at the same time that the park revitalization project begins.

Funds donated in memory of Fred will be used to continue to enhance the Park as Fred envisioned. 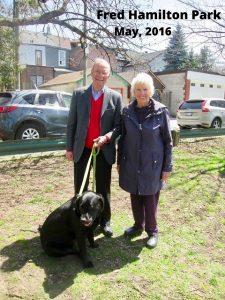 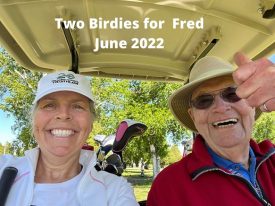 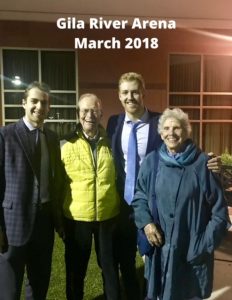