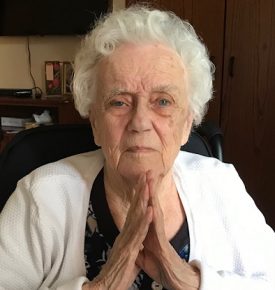 Irene passed away peacefully at the Brucelea Haven Care Center in Walkerton, in her 97th year.

Wife of the late Carl H. Craig (2012) , mother of Gary and his wife Pam, and Lynda Hayter and her husband Robert, grandmother to Lindsay ( Chris) and great grandmother of Madison.

Irene was born and raised in Toronto. In 1955 Irene and Carl built their cottage on Horseshoe Bay in Port Elgin. It was the summer home to many family and friends for more than 60 years where Port Elgin eventually became their permanent home.

Irene volunteered at the Southampton Hospital for over 25 years and was an active summer member of Southampton United Church. Her favourite volunteering time was always the first weekend in July where she would stand at HiBerry farm chatting with everyone and convincing the shoppers to support the local Hospital.

There will be no service. Donations can be made to the Southampton United Church or Saugeen Memorial Hospital Foundation.