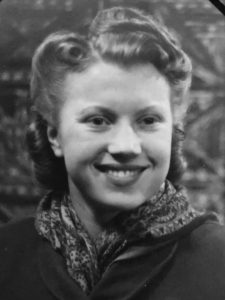 A Private Family Graveside Service will be held at the Southampton Cemetery.

It is with broken hearts we announce the death of Janet Wilson (nee Thomson) at the Muskoka Shores Care Community, Gravenhurst, on Sunday September 20, 2020 at the age of 91. Beloved wife of the late Alexander “Sandy” Wilson. Loving mother of Doug (Bracebridge). Proud and loving grandmother of Amanda and her husband Greg Plester (Kitchener), Kimberley and her partner Kris Morton (Devon, Alberta), Brandon and his partner Haley Turner (Waterloo) and Andrew (Barrie). Loved great grandmother (Gee-Gee) of Liam, Ronan, Abrielle, Alexander and Parker. Predeceased by her parents Alexander & Christina Thomson and her brother John Thomson all of Dunfermline, Scotland.

Janet was born in the town Dunfermline in Scotland where she trained as a hairdresser. With Sandy and Doug in tow, the family emigrated to Canada in 1953. They settled in Paris, Ontario where Janet successfully established “Janet’s Beauty Salon” on West River Street. They left Paris in 1966 but returned in 1970 after a short return to Scotland. When retired Janet and Sandy moved to Southampton where after Sandy’s death in 2009, she settled in at Hampton Court before heading to Muskoka in 2017.

Janet enjoyed knitting, crocheting, needlepoint and preparing her favourite Scottish recipes from her mom’s handwritten cookbook. She had a joy of music and loved to sing and whistle her favourite tunes. Her beautiful Scottish lilt, warm & welcoming smile and loving ways will be deeply missed.

A Private Family Graveside Service will be held at the Southampton Cemetery.