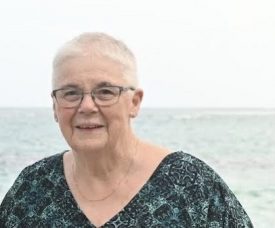 Cremation has taken place.  Arrangements were entrusted to Eagleson Funeral Home, Southampton.  Interment will occur at a later date in the Harris plot in Strathroy.  A celebration of Life will occur when it is safe for groups to gather.

It is with great sadness that we announce the unexpected passing of Joanne at Owen Sound Hospital on December 15.  Joanne was born in Hamilton, Ontario in 1946.  Joanne will be lovingly missed by her husband and best friend, Bill of 50 years, their children Jennifer Skalski (Mike deceased) and Paul as well as her grandsons Xavier and Dylan and by her sister Linda Kearns (Geof).  Joanne was predeceased by her parents, Dr. Wallace and Margaret Fraser and her brother Bill.

Joanne grew up in Troy NY and Hanover NH where her father was a professor of mathematics.  Her family returned to Toronto in 1953.  Joanne attended the University of Guelph, graduating in 1969 with a BHSc degree in Home Economics.  She went on to the University of Toronto and earned her teaching certificate in Home Economics and Science.  While in Guelph, Joanne met Bill, a veterinary student and they were married in 1970.  During her teaching career, Joanne taught Home Economics and science and mathematics in Guelph, Airdrie AB, Brookville and Georgetown.  She was the recipient of several teaching awards including the Prime Minister’s Award for Excellence in Teaching Science, Technology and Mathematics.  She was a member of the Canadian and Ontario Home Economics Societies.  Through CHEA she and her best friend Joanne Mackie travelled several times to Swaziland where they helped develop home economic programs geared to Swaziland needs.

In 2004, Joanne and Bill retired to Southampton where they had had a summer cottage for years.  This gave Joanne time to pursue her passion, quilting.  She make hundreds of quilts that she donated to various charities.  Also she was a quilt pattern tester for pattern designers around the world.  She was a member of several Quilt Guilds and quilt making groups. She read extensively and logged every book with a brief description of each.  She and Bill loved to travel and visited five of the six continents.

Cremation has taken place.  Arrangements were entrusted to Eagleson Funeral Home, Southampton.  Interment will occur at a later date in the Harris plot in Strathroy.  A celebration of Life will occur when it is safe for groups to gather.

If desired, please direct any donations to the Canadian Heart and Stroke Foundation or the Saugeen Memorial Hospital Foundation.