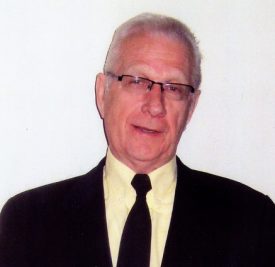 A celebration of life will be held at a later date.

Rose, John Thomas – Known to many as Tony Rose, John Thomas Rose (79) passed away peacefully with his wife by his side, on Monday, June 08, 2020 at the Southampton Hospital.
Tony was born in Newfoundland where he met the love of his life (later to become his wife of 56 years) Lillian Rose (Lehr). Together they moved to Toronto where he worked as a sheet-metal worker constructing the CN tower. After starting their family, Nancy Rose (husband Randy) and adopting Julie, they moved to Deep River area where he held various jobs before working at AECL in Chalk River. He prided himself on the friends he made there and took great joy in reminiscing about those he irritated. He was best known for his willingness to help others and would give you the shirt off his back.

In his retirement he helped to raise his grand-daughters, Regan Geertsma (husband Joseph) and Toni Moore, later moving with Lillian to Port Elgin to live with Regan, Joe and great-grandchildren Jemma and Jax. He spent the last years of his life telling tales to his friends at Tim Hortons and enjoying morning coffees at the beach.  He will be missed dearly, love you forever and a day.

Thank you to the staff at Southampton Hospital, Chapman House, Dr. Hubbs and Dr. Chapman for all their years of dedicated support and outstanding service. A celebration of life will be held at a later date.