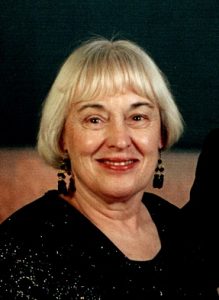 A celebration of life will be held sometime this summer.

After surviving the war June and her family immigrated to Canada in 1948 and settled in Edmonton, Alberta. It was there that she met the love of her life, Christopher, and they were married in 1953. June applied her secretarial skills to a number of positions including the administration for the first Catholic school in Sherwood Park. In 1965 they moved to Ontario, settling briefly in Toronto, followed by Kitchener-Waterloo, Carlisle and finally retiring in Southampton in 2000. They enjoyed their summers by the lake and gathered many new friends.

June was proud of her British schooling and raised her daughters to be articulate and well-mannered, reflecting her command of grammar and social etiquette. She was a meticulous homemaker and consummate hostess for many social gatherings. Aside from decorating and gardening, she and Chris enjoyed biking, cross-country skiing and many years of curling – where more than a few bonspiels brought them joy and the company of good friends. In later years, June and Chris travelled the world, taking in the culture of exotic ports, famous sites and fabled lands. June was an avid traveller in these years and loved returning with art and treasures and mementos.

On home ground, the family enjoyed a number of four-legged friends – all of whom were dearly cherished as they brought laughter and mishaps over the years. In later years, June gradually lost her sight to glaucoma. Despite this affliction, June never lost her sense of humor. Her wit was renowned and her retorts – sharp and frequently hilarious – remained intact to the very end. Even in her decline, her vast memory of history, geography and culture was remarkable – easily beating family members in games of anything that required an agile mind.

When Chris came into June’s life he was already an accomplished professional musician. Their love of music endured throughout and Chris lavished his affection on June through playing his grand piano – including tunes he composed for her – almost nightly. When June was ready to go, Chris skyped in a couple of their favorite tunes to her care home, where he had been deprived of visiting her in recent weeks. Remarkably, within the hour, she was serenaded into the next world by the man she loved. She will be greatly missed and fondly, deeply, remembered.

“Music, when soft voices die,
Vibrates in the memory……
…And so thy thoughts, when thou art gone,
Love itself shall slumber on.”

A celebration of life will be held sometime this summer. Arrangements entrusted to the Eagleson Funeral Home, Southampton.