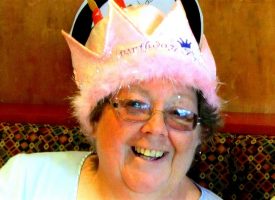 Davey, Lynne Ruth, passed away peacefully at the Southampton Care Centre, on Thursday December 18, 2020 at the age of 68.

Lynne was born on March 27, 1952 in Toronto to Thomas and Helen Davey, who have both predeceased her. She is survived by her sister Lynda Davey-Longstreet of Toronto. Lynne spent the early years of her life on a farm in Springbrook, Ontario (near Napanee) and moved to Hamilton, Ontario in the mid sixties. She attended a special needs school and began working at Bell Chemicals in her late teens. Following the death of her mother, Lynne moved to the Southampton, Port Elgin area where she loved helping people, especially Seniors, and being involved as a volunteer with many organizations. She became an active and valuable member of the Port Elgin Missionary Church where she was much appreciated and loved, a love that she readily returned.

She will be fondly remembered by her special support team of Barbara Linton, Andrea Martin and Joyce Scammell who were the anchors in her life assisting in her day to day living and who always went out of their way to celebrate special occasions such as birthdays, bus trips and award ceremonies.