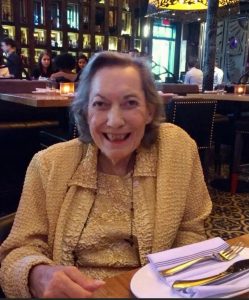 Peacefully on June 3, 2021, Mary Sylvia Frances (nee Droeske) Harmer passed away in her 85th year, surrounded by her children at the family cottage in Southampton, Ontario.

Mary was born September 25, 1936 in Ottawa. She spent the majority of her youth in Ottawa and Montreal. While attending Queen’s University, Mary made many lifelong friends and met Herb, whom she would marry in 1959.

Mary and Herb built a wonderful life together. They travelled the world, loved to entertain friends and family at home and at the cottage, and raised a family of three children and an ever present pair of daschunds.

After leaving the teaching profession to raise her children, Mary volunteered much of her time to charities and to her children’s school and libraries. Due to Herb’s career, they lived in numerous towns and cities in Ontario and Quebec and then moved to the San Francisco Bay area in the late 1970s. Returning to Canada in the spring of 1985, the family lived in Toronto where Mary became involved with many charities and joined a regular Bridge group. Mary was an avid reader and excellent cook who never shied away from tackling complex recipes to serve at her next party. Her sense of humour and enthusiasm for new adventures will be greatly missed by her family.

The family would like to extend a special thank you to Mary’s caregivers who brought her joy and comfort in the previous few years, particularly Marissa Constantino Musa.

Private family internment of ashes to take place at Southampton Cemetery. If so desired, memorial donations may be made to the Saugeen Memorial Hospital Foundation or to your local public library.