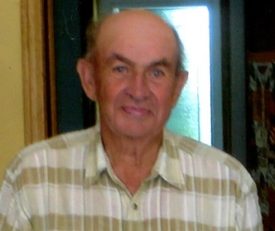 Ribey, Murray Duncan passed away suddenly on Monday April 6, 2020 at the age of 81. Beloved husband to Dorothy Ribey (nee Ziegler). Dear brother-in-law to Joyce Ribey and Pat Ribey. Murray will be remembered by many nieces & nephews, by his extended family, by Dorothy’s family of Joyce Thede, Fred & Dawna Thede, Merv Ziegler, and Velma & Alex Thornburn and their families, and by his many friends. Predeceased by his parents Wallace & Rhoda Ribey, by his sisters Lois and her husband Bill Johnston and Margaret and her husband Bev Cutting, by his brothers Charles and Ross and by Dorothy’s brother Kenny Ziegler. As per Murray’s wishes there will be no visitation or funeral. A private graveside will take place at Sanctuary Park Cemetery, Port Elgin. If desired, memorial donations may be made to the Saugeen Memorial Hospital Foundation.