Harper, Ronald Eric of Southampton at the age of 71, passed away peacefully at the Chapman House, Owen Sound with his loving wife Jean and his sister Elaine by his side on Wednesday July 14, 2021.  Ron was born in Liverpool England and emigrated with his family to Canada in 1953 at the age of 4. Predeceased by his parents William and Ellen Harper. Beloved husband and endearing soulmate of Jean. Dear brother to Elaine (Norm) Donnelly and treasured Uncle to Wendy Donnelly and Heather (John) Fitzsimons, and great uncle to Karley Donnelly. Fondly remembered and forever cherished by sisters-in-law Pat Wilde, Margaret (Joe) Galera, Dorothy (Dwayne) Rebuli,  his brother -in-law John (Lynne) King, and by his many nieces and nephews who truly loved their Uncle Ron.

Ron had many passions in his life. He was an acclaimed musician and in his early years he was a drummer and performer in the popular band “Jason” which toured extensively throughout the USA. His love for classic vehicles was another passion he pursued with great enthusiasm.

His life was also enriched by his many four-legged friends at his side for many a walk.

Ron and Jean moved from Oakville to Southampton in 1992, married in the summer and together fulfilled yet another dream and opened Hampton Travel. They worked alongside each other for 24 years before Ron retired in 2016.

His family would like to extend a special Thank You to Chapman House who provided loving care and comfort to Ron during his brief stay with them.

Cremation has taken place. A Celebration of Life for Ron will be held at a later date. If desired, memorial donations may be made to the Chapman House. 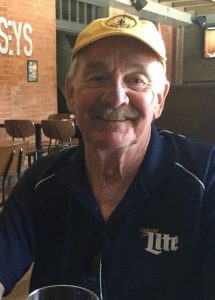