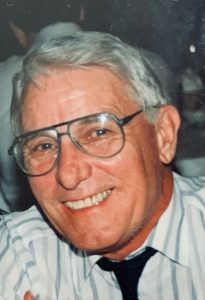 Peacefully, at Southampton Hospital on Wednesday, August 11, 2021, surrounded by loved ones, Ross Prange of Southampton and formerly of Kitchener and Cambridge in his 91st year.

Ross started life on a farm in Breslau, Ontario, and did his elementary schooling in a 2-room schoolhouse. He completed his grade 11 at Galt Collegiate Institute, then went on to marry Catherine Hobler in 1954 and started a family. He had a stellar career selling commercial woodworking machinery and eventually started his own company (P&G Machinery) in Cambridge in 1971.  After retiring in 1992, he moved to Southampton, built his own house with the help of his close friend Harry Mazmanian Sr., then immersed himself in the flourishing retirement community there.

Ross was an avid tennis player all his life, and actively participated in both the sport and helping to operate the various clubs he was a member of – Preston, Chicopee and Southampton.  He was a talented handyman and will always be remembered for helping out others that needed something done around the house. As a skilled woodworker, he derived enormous pleasure from making furniture for his children and grandkids.  As well, during his retirement years, he curled, golfed, played bridge and poker, and participated in many other activities at the thriving Chantry Senior’s Centre.

Beloved husband to the late Catherine Hobler. Dear father to Don of Pickering, Greg of Port Elgin, Matt (Christine) of Kitchener, Lauren of Tacoma, Washington, USA, and Lee Ann of Pickering. He was predeceased by two sisters and two brothers – Ruth, Grace, John (Jack) and Fritz. He will be sadly missed and fondly remembered by his five grandchildren – Teigan,  Dayton, Natalie, Emily (Julian Tropea) and Madalyn, and also by his great-grandson, Leo Tropea. He will be fondly remembered by his numerous nieces and nephews. A special thank-you to Jane Kramer and Harry Mazmanian Jr. – special friends who enriched and brought joy to Ross’ retirement years and who were by his side at the very end.

At Ross’ request, there will be no visitation or funeral service. Cremation has occurred.  Expressions of rememberance can be made to Heart and Stroke Foundation.  Alternatively, donations to the Chantry Senior’s Centre, which played such a fulfilling role in Ross’ retirement, would also be appreciated.