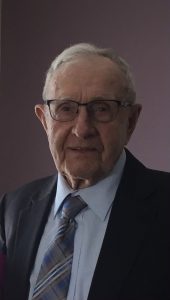 Wade, Willard passed away peacefully with family by his side at the Chapman House, Owen Sound on Saturday April 10, 2021. Willard Johnston Wade of Southampton in his 98th year.

Willard is survived by his wife Freda (nee Chatterton) who were married almost 74 years. Proud father of Brian and his wife June and Kathy and her husband Gary Knutson. Sadly missed by his grandchildren, Jason, Candice, Cara-Lynne (Darryl), and Crystal (Kris) and by his great grandchildren, Caitlynne, Mackenzie, Austin, Adrianna, and Marcus. Survived by his sisters Helen Porter, Doris Kazarian, Dorothy (Jim) Theobald, and Frances McRae, and by many nieces and nephews.

The Wade family would like to give special thanks to Dr. Fenn and staff for their care, compassion and support.

Cremation has taken place. A Memorial Service for Willard will be held at a later date at St. Paul’s Anglican Church, Southampton. Interment of ashes Southampton Cemetery.

If desired, memorial donations may be made to the Chapman House, Canadian Cancer Society or to the Charity of your choice.