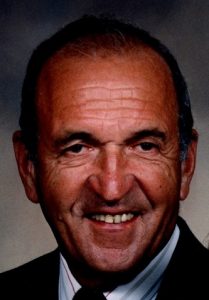 June 29th Karl Louis Fortney, 92, originally from Hanover Ontario, lost his valiant fight with cancer. A man of principle and generosity who was admired and loved by so many. He will be dearly missed by his wife Eileen (nee Dunn), son John (Garren), Daughter-in-law Jill, his siblings Dolores, Rose Marie (Paul), B.C., Patrick (Wanda) Ab., in-laws Elizabeth and Bob Bowerman and George Dunn and his many nieces and nephews all of whom were very important to him. Predeceased by his first wife June (Morrison), son Steven, parents Wilfred and Louisa Fortney and siblings Doreen (John) and Beatrice (Ray).

His successful career at The Royal Bank of Canada that spanned 41 years and a further 6 years as a consultant to the Bank, took Karl and his family to live in many cities across Canada where he accumulated many good friends. Ultimately settling at Head Office in Toronto for close to twenty years finishing as Chief Inspector for Ontario.

He supported the Church and a long list of worthy organizations in every community in which he lived, including The Arthritis Society in Kingston, President of The Lions Club in Fort Erie among many others.

Together with Eileen they shared so many common interests, not the least of which, was giving back to a community that they felt had provided them with such a good life. There were so many causes they supported.  He was especially committed to The Roman Catholic Church and Saugeen Memorial Hospital Foundation along with so many more. Karl will be missed by so many, not the least of which, his loving family to whom he was completely devoted.

The family also wants to acknowledge the compassionate and efficient care offered by the Grey Bruce Health Centre Palliative team and in particular, Dr Marriott, The VON, Rural Home Care, the kind nurses at Saugeen Memorial Hospital that took such wonderful care of Karl and the family his last two days, they could not have been more sensitive or caring during such a difficult time.

In lieu of flowers the family has requested donations be made to the Saugeen Memorial Hospital Foundation, Canadian Food For Children or any charity special to you.